Victory is in the air

It’s been a noisy few weeks at Simply Education’s Head Office. We have seen heartbreak and triumph during the course of our pool and foosball competitions. It’s taken a few weeks to crown our champions, but at long last here they are!

Here’s a summary of the 2 competitions:

The crowd was out in force for the big match between Lydia & Lia and Adam & Daisy. Lia & Lydia raced into a 3-0 lead early doors, only for complacency to set in allowing to Adam & Daisy to get back level. The game then became an end to end battle with both goalkeepers forced into making great saves. Eventually though, the class of the admin duo shone through winning 10-8. Congratulations to Lydia & Lia for winning the first Foosball tournament.

After disappointing displays in their retrospective semi-finals, the matchup between Mohammed and Tillyer wasn’t expected to draw a big crowd and it didn’t disappoint with yours truly, the only member of the media in attendance. However, with pride on the line, the pair went to battle. Lewis soared into a 3-1 lead with Nadim throwing away 2 frames on the black. However, in true style, the man who for some reason is still chanting ‘LETS GO CHAMP’ showed great character to draw the match level into a deciding frame. Unfortunately for him, the mental strength it took to get himself back in the match, took its toll with Lewis ultimately winning the playoff.

After a fair bit of trash talk, Robbo and Tyrone made it to the final. It was expected to a be a cagey affair, with much on the line. Frame 1 was a tight game, with McGarthland missing the opportunity to go one up leaving the black over the pocket for Robinson to capitalise. Robinson appeared to grow in confidence winning the 2nd frame convincingly. The third frame, much like the first frame was close, however McGarthland got his revenge with Robinson missing an easy black and leaving Ty to clear up and bring the score back to 2-1. That concluded the first session of the final.

Frame 4, saw McGarthland bring the match level, after Robinson inconceivably potted the white which should have left an easy black for the win. However, TY made him pay and brought the match level.

Frame 5 will forever be known as the moment where the “self-proclaimed number 1 seed” lost the plot. After Robinson missed a bread-and=-butter pudding on the black, McGarthland was left with the opportunity to steal the frame and go in front for the first time in the match. With 2 balls left on the table, Ty appeared to be lining up the angle so he could get perfectly on the black, only for some bizarre reason to go and pot the black, much to Robinson’s delight gifting him the lead once again.

After his unbelievable mistake in the previous frame, McGarthland appeared to be completely flustered, missing chance after chance to pot. However, Robinson was also struggling to find the pockets. Eventually McGarthland recomposed himself and took the frame to once again bring the match level.

Frame 6 appeared to be a pivotal moment in the match, with Robinson once again missing the black and leaving McGarthland an easy pot to go in front for the first time. McGarthland, now in a buoyant mood, grew in confidence and sealed his victory in the 7th frame with a long pot on the back - worthy of the champion.

We spoke to both finalists, post-match.

Losing finalist, Stephen Robinson had this to say, “The break in play clearly wasn’t ideal for me. I struggled throughout the 2nd session, missing pots that I would normally make in my sleep. My cue appeared to have been sabotaged and I’m not going to lie to you, I’ve been feeling under the weather ever since I ate my wife’s lasagne last night. Taking nothing away from Ty, as he lives on the table throughout his lunch break, he should win”.

A jubilant champion Tyrone Webb-McGarthland had this to say, “Obviously, I’m delighted to have won the first Simply Education pool tournament. I struggled early on in the tournament but the best players always find a way to win. I played some of my best in the final and feel I deserved to win. I’d like to thank all of my adoring fans for their support throughout the tournament and I look forward to defending my title in 2017” 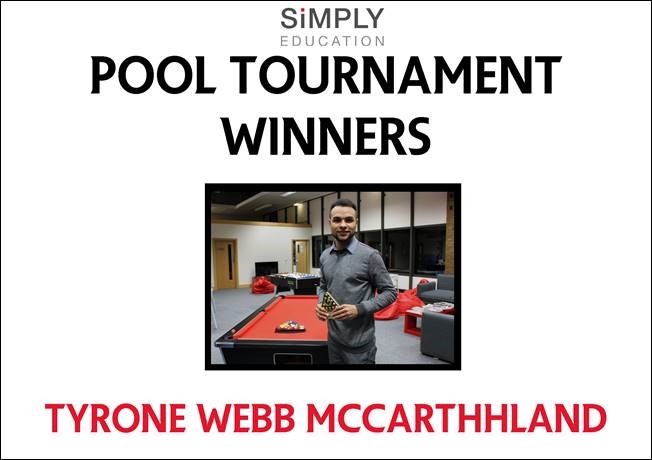